Brethren of the Desert


An overview of the three faiths of Abraham: Christians, Muslims, and Jews. 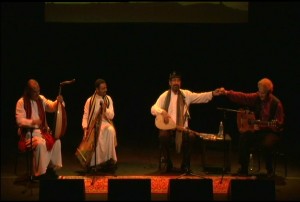 Out of the deserts and mountains of the Middle East, amidst idol-worship and polytheism, there arose a new monotheistic religion: Judaism. Later, a Jewish reformer was born whose followers created a new religion: Christianity. And some 600 years later, yet another reformer, an Arab of the deserts of Arabia, steeped both in Judaism and Christianity founded yet another faith: Islam. In spite of their distinctions all three revere Abraham as their religion’s patriarch.

This course reveals the common elements of the three faiths, recounts their histories, and celebrates their differences. This program grew out of a study of Convivencia (living side-by-side) of Medieval Spain, in which these three religions, cultures and languages lived together and interacted to their mutual benefit.

All programs include a musical component demonstrating the Jewish, Arabic, and Christian music and poetry of Medieval Spain. The programs also include readings from the Judeo-Christian Bible and the Qur’an.

Institutions interested in preparing their students for this workshop may request an extensive bibliography, suggested readings, and course outline in advance of the workshop.

Designed for schools, colleges and universities, presentations range from a two hour overview to a week-long workshop. Emphasis is placed on dialogue, respect, and understanding in addressing the commonalities and distinctions of the three Abrahamic faiths.

These lectures and workshops are available in English, French, Spanish and Portuguese.