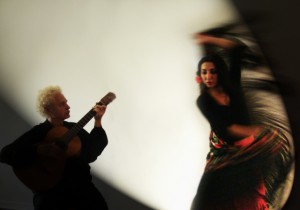 Over many centuries, Gaelic, Arabic, Roman-Christian, and Jewish cultures collided on the Spanish peninsula, eventually melding into a culture that is uniquely Spanish. The confluence of these cultures only happened in al-Andalus, where, sometimes in peace, sometimes in war, these diverse peoples of different languages, religions, and cultures lived side by side.

While perhaps not agreeing with one another on political or religious issues, they were at least listening to their neighbor´s music, watching each other’s dances, and adapting styles, musical instruments, and poetic metaphors to their particular cultural context.

“De la Sierra’s fingers . . . weave a spell. His playing was exquisite, ineffably sweet . . . a flow of motion between fingers and guitar that erased reality.”

From such diversity comes the richness of flamenco music, dance, and song. Flamenco dance and music contain aspects of both the Middle East and Europe. The upper body of the flamenco dancer with its fluidity is distinctly Arab, while the lower body with it rigidity and foot work is argueably Gaelic in origin. In the same way, the flamenco guitar uses both Greek and Arab scales in a combination found only in Spain. The twelve beat rhythms (compás) that are the hallmark of Spanish music and dance exist nowhere else in the world.

The shows and concerts of Music of Spain are tailored to the client’s requirements. From a single guitar/singer to a full “tablao” of guitarists, singers, dancers, and percussionists, Fuego Famenco (Flamenco Fire) will bring to you the passion of Spanish music and dance.